(Albany, NY) At the annual NYS Black & Puerto Rican Caucus Weekend, StudentsFirstNY teamed up with Assemblymember Michael Blake to host a panel discussion on how New York’s school system can best serve communities of color. Moderated by NYCAN Executive Director Derrell Bradford, the panel featured leaders in the education reform movement as well as public school parents from across the state.

In introductory remarks before the standing-room only crowd, Bradford offered a sharp critique of the state of education, telling the packed room, “We're here to talk about what we believe is a crisis in the education of children of color. Not just in New York, or in Buffalo or in Rochester, but in America and that crisis threatens to make it impossible for millions of kids of color to become the people they were meant to be. This is not about public schools vs. charter schools vs. private schools – this is about schools you want to send somebody you love to vs. ones you don’t.”

The event ended on a high note, when Assemblymember Michael Blake and Assemblymember Marcos Crespo spoke directly to the crowd about the education concerns in their community.

Assemblymember Crespo relayed a personal story about low expectations, poor communication, and inattention from teachers and administrators in his stepdaughter’s school: “My wife would cry herself to sleep, thinking she was a failed parent because of how far behind her daughter was. She called the school on a regular basis, demanding services and opportunity: afterschool, tutoring, everything else… It wasn’t until I got elected and I happened to accompany her to the school, where she wanted to speak to the principal of the school to find out why on month four of the school year there wasn’t one notation in her notebook; a homework that I had helped her with. There was nothing in there. When I showed up, as an elected official, the very next day, they offered her two options for afterschool programs, they assigned a tutor for math and English. And I was angry. I wasn’t glad that I got that. I was angry.” 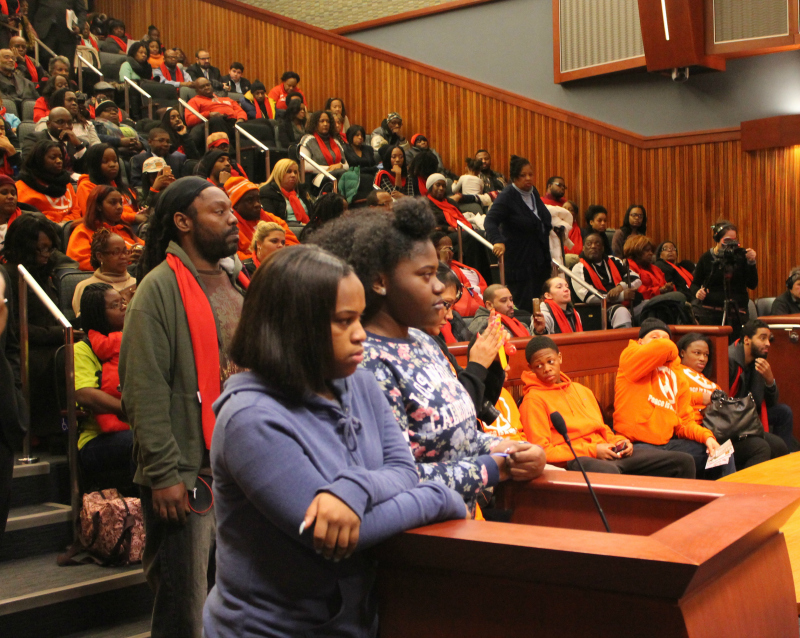 When asked by two high schoolers how we can “make it safe for more education reform politicians to run for office,” the panel all smiled at the sophistication of the question. Assemblymember Michael Blake responded that it can be hard for a politician to talk about education reform because “people are concerned more about slogans rather than students and politics rather than pupils” and said to the audience, “I need you to have our backs all of the time.”

Earlier, Dr. Howard Fuller from Marquette University kicked off the lively discussion by saying, “In 1960 four students sat down at a lunch counter in Greensboro, North Carolina and demanded to be served. And when they did that, they changed the trajectory of the world. But here we are in 2016 and four black students sit down at a lunch counter, where they are welcomed, but where they can’t read the menu.” 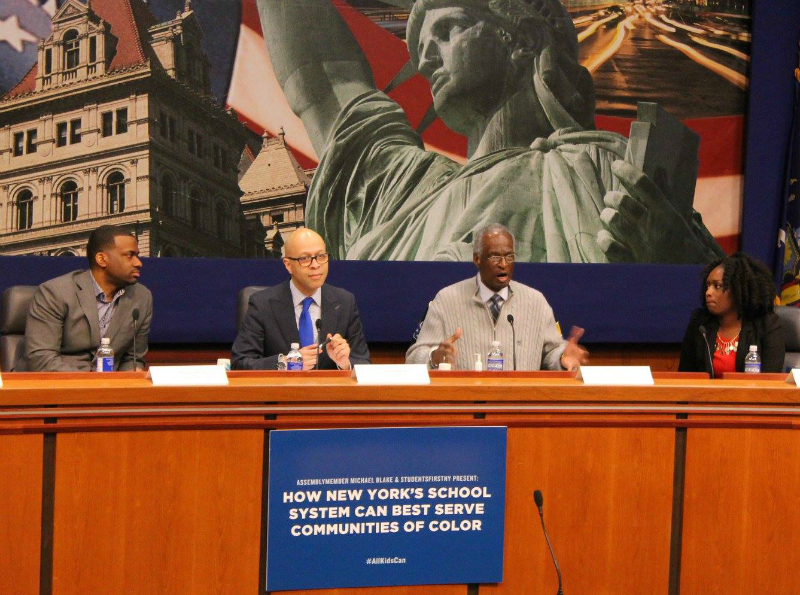 Au Hogan, a public school parent and grandparent talked about his personal experiences with struggling public schools: “Growing up in Jamaica, Queens, I can’t stand to watch another generation of children trapped in struggling schools with no hope for real opportunity. Improving education for communities of color starts with expanding school choice and improving access to quality schools for all students. Kids in poor neighborhoods have just as much right to a quality public education as kids in wealthier areas. Now, we just need leaders with the political will to make it happen.”

StudentFirstNY’s Senior Director of Organizing Tenicka Boyd talked about what she hears from fellow public school parents: “The members of our communities deserve a school system that values every child, that is accountable to the families it serves, and provides all students with an equal opportunity to gain the skills they need to lead successful lives.

Samuel Radford III, President of the District Parent Coordinating Council in Buffalo, who is a parent activist and proponent of school choice, said “The idea that we should take the time to fix traditional education while our kids wait is mind-boggling.”

Shavar Jeffries, the President of Democrats for Education Reform spoke about the importance of quality teachers: “Precisely because teaching is so important, we have to confirm, honor, embrace, support, develop the many great teachers. Those that are caught in the middle, you have to help them develop so they can go from the middle to being great and those at the bottom, you have to say, ‘you know what, you can find something else to do.’ It shouldn’t be that complicated. It doesn’t have to be some dramatic fight. If you can’t do it, do something else. If you get on a plane, you do not want to see me in that cockpit; I don’t know what I’m doing. That doesn’t mean that I’m a bad person. That doesn’t mean there is a conspiracy where Shavar shouldn’t be in cockpits. It means you can’t fly that plane well and we want people to arrive where they’re supposed to, on time and in one piece.”

National education reform leader Dr. Howard Fuller explained the need to understand the difference between public education and the system that currently delivers it:

“Public education is the idea that we want the public to be educated. What we want to do is make the public have access to any school that would educate them. And because I criticize the system, it doesn't mean that I'm against public education. What I'm saying is that the systems that have been set up to deliver education are failing too many of our children. And the one thing that we are absolutely clear about is that if we don't make sure that these young people have access to schools that will give them an education, there is another public institution that is waiting for them on the other side.”

To listen to the panel in its entirety, please click here.