In the days leading up to Thanksgiving, members of the StudentsFirstNY community are highlighting the people who they are most #ThankfulFor this year. Today StudentsFirstNY organizer Darlene Boston shares why she is inspired by and #ThankfulFor Councilman Robert E. Cornegy, Jr. of New York City’s 36th District. 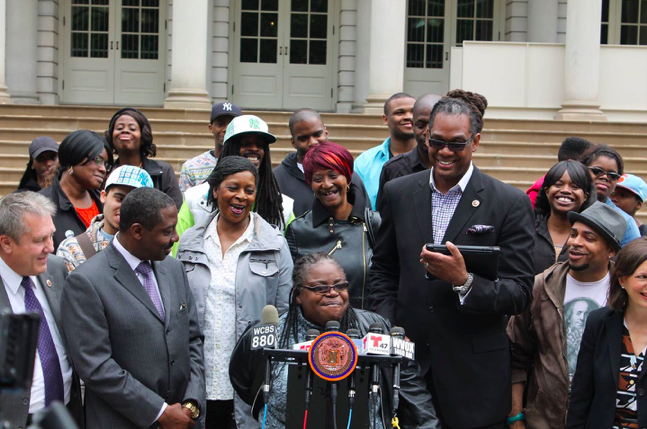 Pictured: Darlene Boston, with Councilman Cornegy to the right, at a press conference celebrating the passage of the Audible Alarms Bill.

I am thankful for Robert Cornergy, Jr., City Councilman for Bedford- Stuyvesant and Crown Heights. I met Robert Cornegy, Jr. back in 2012 while he was still a policy analyst for the City Council.. He informed me that he was a parent of six children who attended public school in Bed- Stuy, and he shared his personal conviction that every child deserved a quality education, regardless of zip code.

I have had the pleasure of working closely with Councilman Cornegy on the Audible Alarms Bill. He is able to take off his politician hat and listen and engage as a parent and a community member. The councilman  has inspired me to fight harder to educate parents and community members in Bed-Stuy and to demand that our children have access to a quality education.

Councilman Cornegy has exhibited a commitment to public education by enrolling his twins in public school. He has always been truthful and honest about what he can do to improve education in Bed Stuy. And he will use his position to promote positive changes for Bed Stuy, like restoring library hours at the Marcy Branch. I am so #ThankfulFor Councilman Cornegy’s continued commitment to the community.

StudentsFirstNY is New York's leading voice for students who depend on public education for the skills they need to succeed, but who are too often failed by a system that puts special interests, rather than the interests of children, first. Join us in celebrating the people in your life that have inspired you to seek and fight for a better world. Tweet at us @StudentsFirstNY, follow @StudentsFirstNY on Instagram, and tell us who you are #ThankfulFor this year.