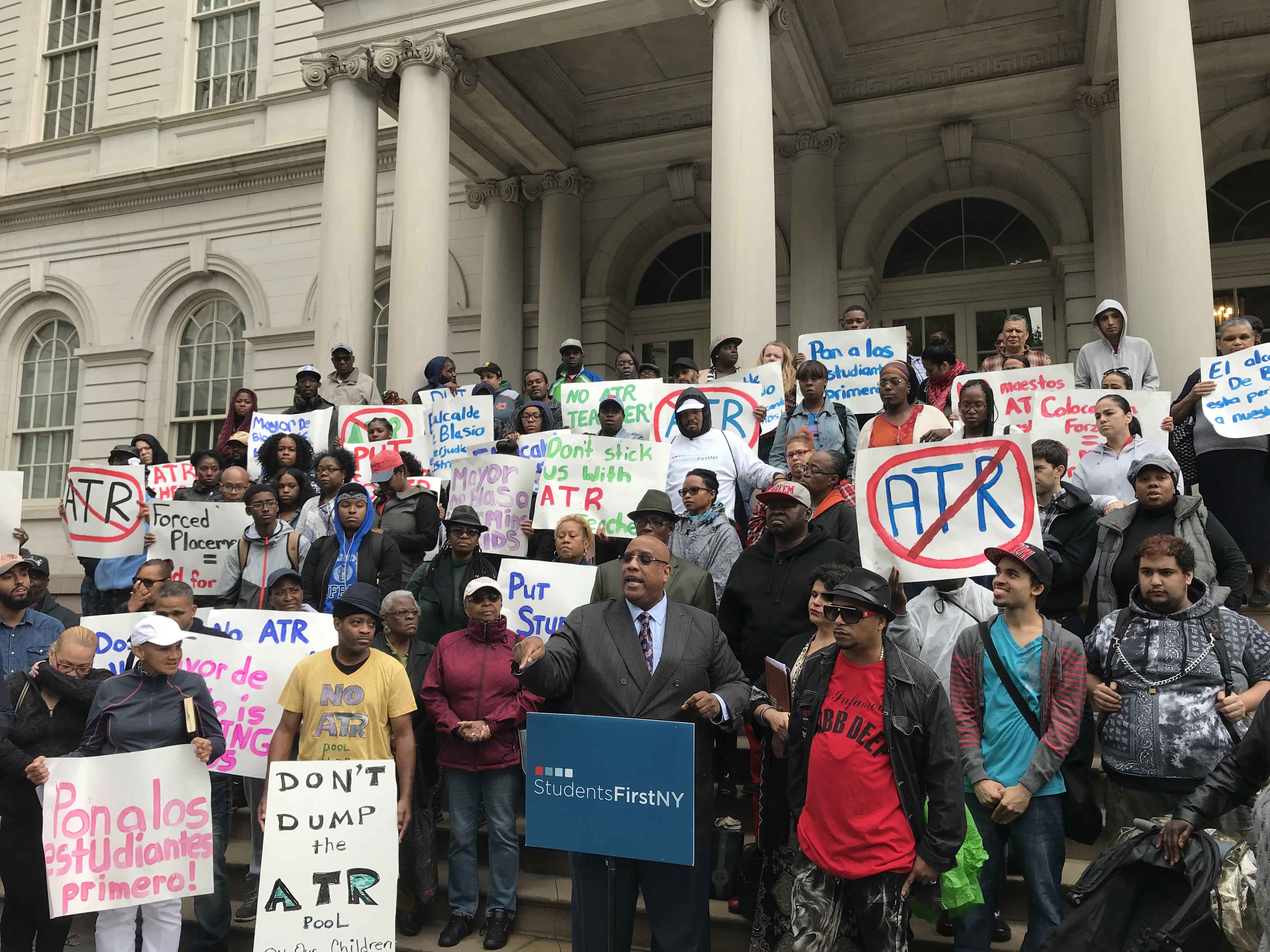 “We are days away from the Mayor taking an action that will harm our most vulnerable children. These Moms and Dads have taken off work to come out today in the hundreds and with our religious leaders to implore Mayor de Blasio not to put these ATR teachers in our classroom,” said StudentsFirstNY Organizing Manager Darlene Boston.

“A great teacher has the power to unlock the doors of opportunity and an ineffective teacher can slam them shut. Mayor de Blasio – my congregation deserves the very best teachers, not the ones you plan to force into their schools.” said Mount Neboh Baptist Church Reverend Johnnie Green.

The Absent Teacher Reserve (ATR) is the name for the pool of teachers who are unable to find permanent teaching positions even though there are vacancies. When Mayor de Blasio first announced his plans to close the ATR pool, Schools Chancellor Carmen Farina pledged to do so without resorting to forced placement – a policy that allows the NYC Department of Education (DOE) to place a teacher from the ATR pool at a school whether or not the principal wants to hire that teacher. This summer, the Mayor announced that he had flip-flopped on this promise and would be placing 400 teachers from the ATR pool into permanent positions by October 15.

Parents have reason to be concerned about the ATR, considering the data released by NYC DOE earlier this year:

The NYC DOE has refused to reveal the locations of where these 400 forced placed teachers will end up, but a few clues have popped up. According to one recent media report, of the more than 1,700 job openings that have been posted a significant number are in in low-income neighborhoods. The full list of openings has restricted access and requires a special password. This lack of transparency has sparked fear among parents living in these communities.

StudentsFirstNY has requested information about the ATR for nearly two years – filing FOIL requests, holding press conferences, and protesting outside of Mayor de Blasio’s gym – but City Hall has refused to answer even basic questions.

“School principals keep passing over these teachers, but now it’s our kids who are going to be forced to deal with them. How come it’s always the schools in our neighborhood that end up with these unwanted teachers? Our kids deserve better,” said Bronx father Montrelle Douglas.

“I pay my taxes, I play by the rules, and I want a quality education for my children. I am sick and tired of seeing kids in wealthier neighborhoods get all the breaks while my kids are stuck with the leftovers. Mayor de Blasio – our kids deserve better. Don’t force these unwanted ATR teachers on them,” Bronx mother Gloria Alfinez.

“The Mayor is turning his back on families in our community. He would never accept low quality teachers for his kids, so why is the Mayor dumping them on ours?” said Bronx mother Luz Ruiz.