73,000 Students Live in Districts Without a Single Quality Middle School

The number of students without access to a good middle school would qualify the group to be one of New York’s “Big Five” school districts. Selective admissions and Renewal schools provide no relief – the only schools in these eight districts achieving results for students are charters.

In all eight of these districts across NYC, not a single traditional middle school achieved the citywide middle school average proficiency in reading (37%) or math (32%) on the 2016 state tests: 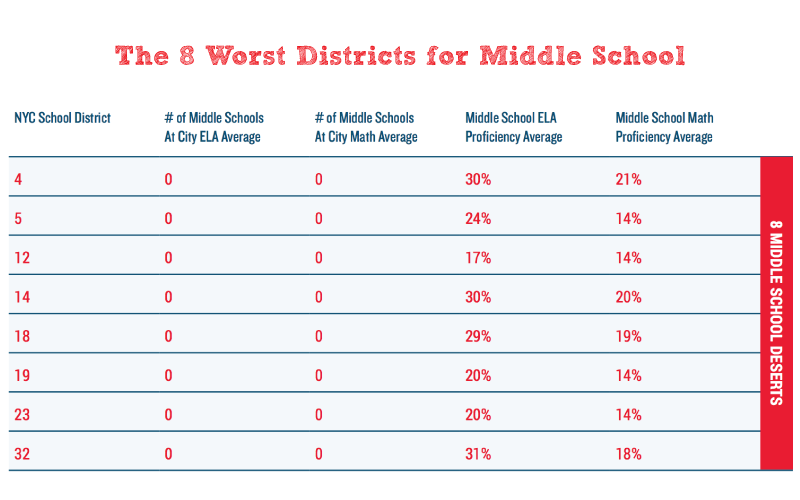 Parents are fed up that Mayor de Blasio has ignored the middle school problem in this city:

“Ask any parent and they’ll tell you there’s a serious middle school crisis in this city,” said StudentsFirstNY Senior Director of Organizing Tenicka Boyd and a public school parent in a middle school desert. “It is a nightmare trying to find a good middle school for my daughter. It’s inexcusable that Mayor de Blasio has done nothing to address this glaring problem.”

“When just 11 percent of students at my daughter’s middle school can pass state math tests, something is horribly wrong. What message do we send to these kids when they have no options at such a critical point in their lives? Mayor de Blasio can’t continue to ignore our community’s needs,” said Bronx Parent Alberto Trujillo, Middle School Desert District 12.

“Just because I live in a low-income neighborhood doesn’t mean my grandchildren should have no middle school choices,” said Brooklyn Grandmother Felipa Ramirez, Middle School Desert District 32. “Mayor de Blasio needs to show up for us and give us real options, or we won’t show up for him on Election Day.”

“It’s been three years since Mayor de Blasio took office, but he’s done nothing to improve the middle school options in my district. My granddaughter is stuck in one of these underperforming schools and I don’t want the same fate for my grandson,” said Brooklyn Grandparent Karen Nettles, Middle School Desert District 23.

“In my neighborhood, the only good middle school options are charter schools. I’m thankful that I found a charter middle school, but that’s no thanks to Mayor de Blasio who opposes them every chance he gets. The Mayor has to wake up and fight for ALL kids because it’s outrageous that there are neighborhoods with no good middle schools,” said Kathryn Marrow, Harlem Parent, Middle School Desert District 5.

In Mayor de Blasio’s three years in office, he has failed to prioritize middle schools. It’s a major crisis with no significant policy solutions on the table. The futures of 73,000 students are at stake and Mayor de Blasio and his administration must do more to provide real options immediately for these families, in order to put them on the right path for high school and beyond.