Hundreds of Parents Rally for Answers on ATR Cover Up

New York, NY – More than 500 district school parents rallied outside City Hall today to demand answers from Mayor de Blasio about the Absent Teacher Reserve (ATR). In just two months, more than 7,500 parents have now signed on to the effort to get the de Blasio Administration to turn over basic information about where ineffective teachers from the ATR pool are being placed.

“I sent a letter to Mayor de Blasio about this issue because as a parent and a citizen, I have a right to know who is teaching my child. But instead of answers, I got a dismissive reply from a low-level staffer. It’s time for the Mayor and the Chancellor to come out of hiding and let parents know what’s happening with the ATR ,” said Brooklyn parent Camille Artemus.

In the middle of the rally, Mayor de Blasio exited City Hall, but instead of responding to the 500 parents' call for details about the ATR, he never broke stride.

“My kids go to an elementary school in Bedford-Stuyvesant where a teacher was arrested. I want to make sure that another teacher like him doesn’t end up in my kids’ classrooms. I deserve to know who is teaching our children – and I deserve to know right now,” said Brooklyn parent Nicole Thomas.

“For months parents have been asking for more details on the ATR, but the City continues to hide the truth,” said StudentsFirstNY Executive Director Jenny Sedlis. “Parents can’t trust that the City is placing effective teachers in their children’s classrooms, and the burden is on the City to prove that it has been. Parents deserve better than this and we won’t back down until the ATR cover-up ends.”

“Parents from low-income communities should be treated with as much respect as parents in wealthier neighborhoods. We are asking for basic information and more attempts by the City to stall show that there is a real problem here,” said StudentsFirstNY Senior Director of Organizing Tenicka Boyd.

“My grandchildren deserve to be taught be great teachers, just like kids in other neighborhoods. If the Mayor wants to talk about equity, let’s start with teacher quality for schools in low-income areas,” said Queens parent advocate Au Hogan.

The parents who spoke at the rally today represent communities that are disproportionately impacted because teaching vacancies occur most often in low-income neighborhoods of color.  The parents’ campaign has included: 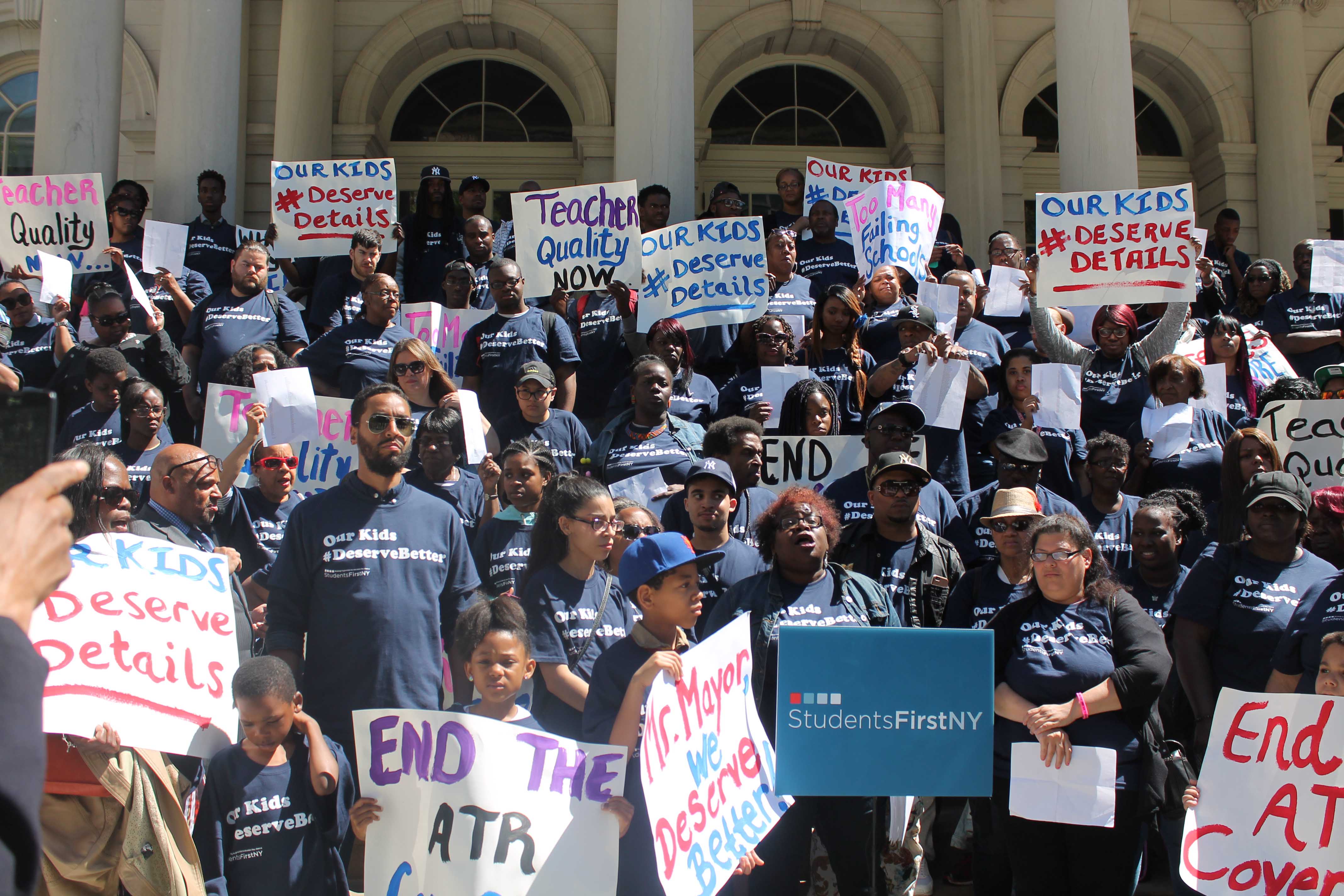 StudentsFirstNY submitted a Freedom of Information Law request to the de Blasio Administration in November 2015, asking for more detailed information about the Absent Teacher Reserve (ATR).

The DOE claims it has placed 500 ATR teachers into regular positions, but the City failed to divulge where those teachers were sent and how they determined why these teachers should return to the classroom. Presently, more than 1,000 teachers remain in the ATR, costing taxpayers at least $100 million.

Among the information StudentsFirstNY has requested:

For a link to the correspondence between Camille Artemus and the DOE, click here and here.